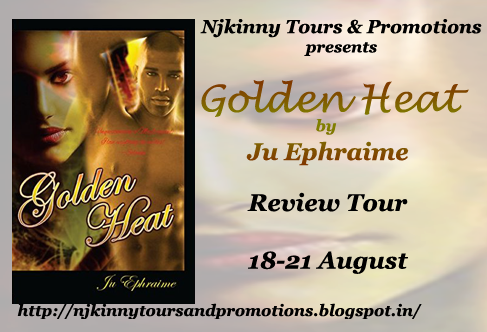 Welcome to my stop on the Review Tour of Golden Heat by Ju Ephraime. This is a spicy romance with an intriguing twist of mystery. 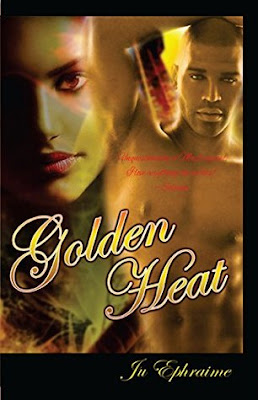 Andy Redfield is a hard-nose real estate developer, trying to settle his father’s estate and locate the treasure that was mentioned in his father’s will. Bernie Harp is a no-nonsense, private investigator, and who specializes in locating lost objects. When Andy hires her to find his dad’s treasure, she anticipates working alone, as was her custom. She communicates this to Andy in no uncertain terms, but Andy was having none of it. If anything, he was more determined than ever to lend his assistance. When finding the treasure becomes more than a routine job, and the presence of a suspicious intruder is discovered, tempers flare and sparks fly. While they have difficulty seeing eye-to-eye, Andy and Bernie agree on one thing: They need to capture the intruder and locate his father’s treasure.
Kicking and screaming, Bernie is forced to accept his presence on the job, even though it was distracting as hell. With them rubbing each other the wrong way, before they know it, the friction they generate turns to love’s golden heat, igniting a fire neither expected, and neither could deny. So, when Bernie unexpectedly disappears, Andy realizes she was more precious to him than all the treasures in the world, and he’d give up anything to find her—anything, including the treasure, only is he prepared for what he finds?

I received the review  copy of this book by the author herself .Thank you  Njkinny Tours & Promotions for the same.

The book Golden Heat by  Ju Ephraime is amazing book to read .The author Ju Ephraime has shaped the characters and their emotions  very well and in an very passionate way .

The conversation Bernie and Andy is simply great to read.The sparks that fly when they meet each other and how they control their flames of desire are penned down well .

What I like about this book : Bernie and Andy respect each other feelings and they do not over do unwanted things  to impress each other .

Golden Heat by  Ju Ephraime is a must read read book .

Ju Ephraime began writing professionally at age 19; at that time, she wrote short stories for the local radio station in her home town. She gave up writing to pursue her education and has since earned several degrees, including two Masters and a Doctorate in Higher Education Administration from Northeastern University in Boston. During the course of her schooling, she wrote and published a working curriculum for a career school, a business manual and its answer key, as well as other literary work. In 2010 she revisited her first love, writing for fun and enjoyment. She writes high heat, steamy, romance novels. The first was, State of Ecstasy in the LaCasse series, which was soon followed by, Temptation to Sin, Loving Therèse, #2 in the LaCasse series. Ju has gone on to write several more books, including, The Odor of Violet, on tour this month, Complete Surrender, #3 in the LaCasse series; as well as, a Christmas Novella, Footsteps in the Sand and her award winning paranormal, White Magic Woman, Quarterfinalist in Amazon Breakthrough Novel Contest, 2013, out of over 10,000 entrants.


Ju lives in Connecticut, where she is very active in her community. She is the administrator of a business school and the president of a non-profit organization that dresses individuals for job interviews.
Visit her blog at http://www.juephraime.blogspot.com or her personal page at http://www.juliaeantoine.com where you can sign up for e-mail updates and be the first to hear about new releases.
Find Ju on Facebook at https://www.facebook.com/juephraimeauthor. She loves to chat with readers.
Follow her on Twitter at https://twitter.com/JuEphraime
Goodreads: https://www.goodreads.com/author/show/4981235.Ju_Ephraime

Open only to those who can legally enter and receive the prize. Winning Entry will be verified prior to prize being awarded.No purchase necessary. You must be 18 or older to enter or have your parent enter for you. The winner will be chosen by rafflecopter and announced here as well as emailed and will have 48 hours to respond or a new winner will be chosen. This giveaway is in no way associated with Facebook, Twitter, Rafflecopter or any other entity unless otherwise specified. The number of eligible entries received determines the odds of winning. Giveaway was organized by Nikita (Njkinny) from Njkinny Tours & Promotions and sponsored by the author. VOID WHERE PROHIBITED BY LAW.
a Rafflecopter giveaway
~Hosted by~

Please let me know your thoughts :-)

Proud to be an IndiBlogger

Rate for my blog here

Spread A Word about Writersezine.com